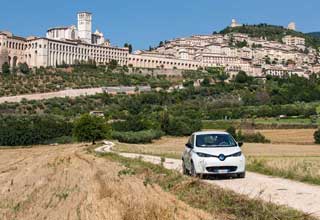 During his trip to Italy, Goethe visited Spoleto and wrote:
“I climbed Spoleto, and was on the aqueduct, which is also a bridge from one mountain to another.

Through all their centuries, the ten brick arches which reach across the valley have stood there so quietly,and the water still flows in every corner of Spoleto. I have now seen three works by the ancients; they all have the same great meaning, a second nature serving civic ends. That is how they built, and there they are: the amphitheatre, the temple, and the aqueduct” (traduzione da Johann Wolfgang von Goethe, Italian Journey, tr. Andrew Shields).
When I come to Umbria, I feel the same. When I drive on Via Flaminia, and the aqueduct and Rocca Albornoziana make their way in the landscape, it always makes me gasp, even though I travel the same way more than once every month. The best is that now, in the new millennium, the ‘Grand Tour’ can be undertaken by an electric car, so that you can reach that magnificent scenario no longer by carriage, yet not even using a polluting car: you can travel around the area by a silent, zero-emission and efficient electric car. Indeed, Region Umbria implemented a network of charging stations all over its territory, which connects different cities and villages in Umbria, in order to improve the quality of urban life while helping the environment. The very short distance between one village and another, often around 40 kilometres, makes travelling by electric car possible, even with the limited endurance of nowadays electric vehicles. At the moment, there are charging stations in Perugia, Terni, Gubbio, Gualdo Tadino, Foligno, Spoleto, Cascia, Norcia, Marsciano, Narni, Castiglione del Lago, Città di Castello, Todi, Assisi, Orvieto and Marmore.
At Marmore Falls you can even find two types of charging stations, one public and one private, and charging there you are sure that the electricity you will use during the trip was produced by an hydroelectric power plant, a clean and renewable source of energy.
Fifty years after the opening of Autostrada del Sole (“Motorway of the Sun”, the highway connecting Milano to Napoli), now we have the first “motorway of electricity”, or maybe the second as Region Emilia Romagna also implemented an electric mobility programme in its area.
Umbria is currently also enjoying a car sharing programme within its borders, it is probably the only one in Italy totally suitable for regional tourism. It is useful for residents as well, because people living in Umbria can also rent the cars, maybe for a weekend in the nature. Using “Umbria Green Card” it is possible to charge in every station and you also enjoy promotions in some accommodations facilities: this is the first example of a network for green tourism that will pave the way for future development, I am sure about it.

“THE ‘GRAND TOUR’ GOES ELECTRIC IN UMBRIA” by Gabriele Salari