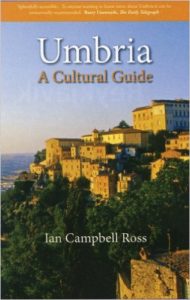 As the title states, this is a cultural guide. Culture is one of the aspects that make Umbria magic, and Ian Campbell Ross knows it well.

“Umbria: A Cultural Guide” tells the story of the region from the days of the ancient Umbri, a thousand years before Christ, through to the unification of Italy and up to the present day. Ian Campbell Ross, literature professor at Trinity College in Dublin, describes the historical heritage of Etruscans, Romans, early Christians and Longobards, together with the cultural importance of city-states like Perugia, Spoleto and Orvieto. The narration touches all the Region, from monuments to medieval castles, from churches to cathedrals, and includes the masterpieces of Giotto, Perugino and other Renaissance artists, last but not least local food and wine. The book gives visitors full details of what to see in the cities, hill-towns, mountain and lakeside villages. Special mention for the chapter about Assisi, which recounts beautifully how S. Francis and his followers made the city a spiritual and cultural centre.