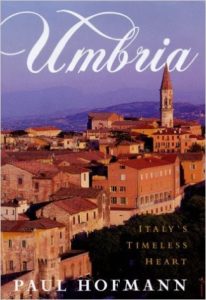 Being him an expert of Italy, it doesn’t surprise that Paul Hofmann chose Umbria as his favourite region. “Umbria: Italy’s Timeless Heart” is the result of more than forty years of travelling and visiting, so that the author not only described Umbria but he also shared some of the secrets he discovered during the time spent there. The book is permeated with  Etruscan and Roman ruins, medieval castles, grand cathedrals and palaces, marvellous landscapes and outstanding art such as Giotto’s frescoes in Assisi or paintings by Perugino. Describing the valleys and mountains of Umbria, Paul Hofmann painted in words the real aspects of the region, giving it the credit it deserves and often absorbed by the more famous Toscana. “Umbria: Italy’s Timeless Heart” is a useful travel book, but it is also written with passion and emotion, by someone who left a piece of his heart in Umbria.